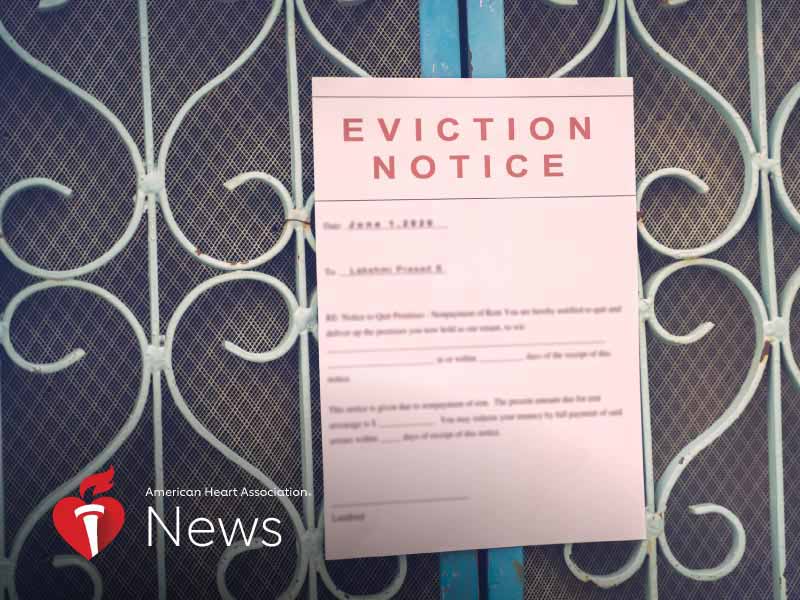 With unemployment rates hovering at or near double digits, millions of people are at risk for eviction or foreclosure. And a growing body of research suggests the effects go beyond financial, taking a toll on both physical and mental health.

The CARES Act passed in late March included a moratorium on some evictions and an additional $600 per week in unemployment benefits. But those federal protections expired. A patchwork of temporary local, state and federal eviction moratoriums are in place, but the long-term picture is still uncertain.

In fact, an analysis by Stout Risius Ross, a global consulting company, estimates more than 17 million U.S. households – or more than 43% of rental households – are at risk for eviction over the coming months.

“The health impact is substantial, and it spans multiple realms,” said Shakira Suglia, an associate professor and director of graduate studies in the department of epidemiology at Rollins School of Public Health at Emory University in Atlanta.

For example, a 2015 study in the journal Social Forces showed mothers who were evicted were more likely to experience depression and higher parental stress than those in stable homes, and they also reported worse health. A nationwide survey conducted by the Centers for Disease Control and Prevention in 2015 found that people with self-reported cardiovascular disease were more likely to face housing insecurity than those who didn’t have heart problems. Research also shows people who face the threat of eviction are at greater risk for high blood pressure.

Black and Latino communities are at even greater risk. Studies from cities throughout the country show that people of color, particularly Black and Latino people, make up about 80% of those facing eviction, according to a report last month from a group of nine academic groups and housing advocates.

Matthew Desmond is a sociologist whose Eviction Lab at Princeton University was part of that report. He has conducted research showing that while Black women in Milwaukee neighborhoods made up less than 10% of the population, they accounted for 30% of evictions. Desmond won a 2017 Pulitzer Prize for his book “Evicted: Poverty and Profit in the American City.”

Dr. Megan Sandel, an associate professor of pediatrics at Boston University School of Medicine, said the pattern of evictions often follow the historic trends of disinvestment in communities from redlining, the unequal treatment in lending faced by many communities of color. “You see this perpetuation of housing discrimination even to this day.”

Black and Hispanic households are almost twice as likely as white households to lack housing security, according to a 2014 report from the Joint Center for Housing Studies at Harvard University.

Sandel, who also is an associate professor of environmental health at Boston University, said federal rental assistance and extending unemployment insurance could help families, but long-term solutions are needed.

“When families are able to move to areas with less concentrated poverty, their kids have higher lifetime earnings and are able to move up the economic ladder,” she said. “We talk about health so much in terms of pills or interventions, but a stable, decent, affordable home is the best intervention I can provide to my families. Right now, that’s under threat for millions of Americans.”

Suglia, who co-authored an AHA scientific statement about housing and health, said an array of factors, such as stress, can impact health when a family is worried about paying their rent or being able to stay in their home.

Under chronic stress, physiological systems may become dysregulated. Additionally, being in a constant state of worry may increase the likelihood that people turn to smoking, alcohol, and fat and sugar-laden foods, she said. That all can have physical effects.

“When your housing becomes unaffordable, you may neglect medication, health care, food and heat,” she said. “All these things only exacerbate or create additional health problems.”

While local and federal governments grapple with the issue, many nonprofit organizations are stepping in to help.

For example, the American Heart Association and Enterprise Community Partners, a national affordable housing nonprofit, recently held a free webinar to help faith organizations learn strategies to convert unused property into affordable homes. Funded in part by the Kresge Foundation, the groups will hold additional workshops in late 2020 and early 2021.


In Chicago’s Washington Heights, the Endeleo Institute, named for a Swahili term for growth and progress, is doing similar work to repurpose assets in that predominantly Black neighborhood’s 95th Street corridor. The group also is working with the AHA, Northwestern University and other institutions to organize farmers markets and launch health education efforts.