Home » Health & Fitness » A Stroke at 37 Meant Relearning Everything

A Stroke at 37 Meant Relearning Everything 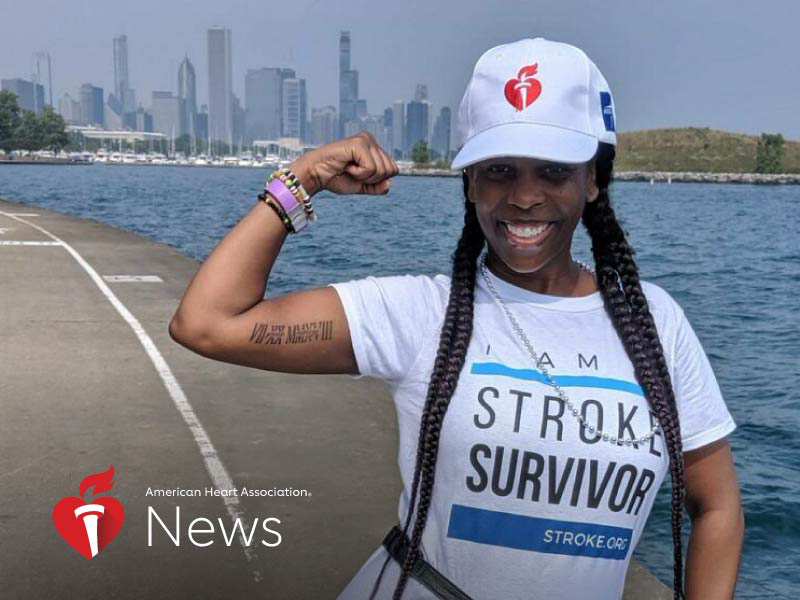 On most Fridays, Angela Crenshaw worked from home.

But the day before, Crenshaw had joined colleagues on a work outing to a horse racetrack to celebrate their manager’s 10-year anniversary on the job. She’d even squeezed in a session of hot yoga afterward.

So, to catch up on things, she headed into the office that Friday, making the one-hour trip to her job in the employee relations office of a health care company. She settled in, ate a snack of guacamole and got down to business.

About an hour later, she developed a sudden headache. She felt faint and her breathing became labored. She’d had migraines before, but this seemed even stronger.

She started to type a message to her manager, Martha D’Sanchez, to let her know what was going on.

“But I couldn’t move my arm,” Crenshaw said. “I was looking at it, but it wouldn’t move.”

Stay calm, she told herself. Make it to the hallway so you can get help.

“No,” Crenshaw said. “My arm fell asleep and my face feels numb.”

Yet D’Sanchez hardly understood the words. Crenshaw’s speech was slurred.

Knowing that Crenshaw was allergic to peanuts, D’Sanchez asked if that might be the problem. Crenshaw wondered the same thing and nodded in agreement.

D’Sanchez asked a colleague to call 911. Then she ran to Crenshaw’s office to get the EpiPen she kept handy in case of an allergic reaction. D’Sanchez jabbed it into her colleague’s thigh in hopes of relief.

The paramedics arrived with another suspected diagnosis – she was having a stroke.

At the hospital, an MRI showed a clot obstructing the flow of blood in Crenshaw’s brain, a classic ischemic stroke. Luckily, she got to the hospital in time for doctors to administer a dose of clot-busting medication.

The medicine indeed dissolved the clot. Still, some damage was done.

After a week at the hospital, she went to a rehabilitation facility for two weeks of inpatient care, followed by three months of outpatient visits. Her mother came from Arkansas and stayed with her for a couple of months as she relearned basic skills.

“The first time I talked, I sounded beyond drunk,” Crenshaw said. “When I tried to write my name, it looked like what a 4-year-old would write. I still have that piece of paper.”

More things she had to relearn: how to eat, walk, brush her teeth, dress and bathe herself, and drive. Challenges included fine-motor skills such as buttoning and hanging clothes on a hanger.

While she was determined to improve, Crenshaw also was fixated on how the stroke even happened.

Doctors saw no obvious cause. She exercised, ate well, had never smoked and knew of no hereditary issues.

Stroke is the No. 5 cause of death in the United States and a leading cause of severe, long-term disability. Yet despite its prevalence, the reason for about 1 in 4 ischemic strokes (the kind caused by a clot) is undetermined; these are called cryptogenic strokes.

“I kept thinking, ‘What did I do to myself? How did I hurt my body?’ I thought I’d been taking care of myself,” Crenshaw said. “Then a therapist told me, ‘It just happened. They don’t know why. Just focus on moving forward.’ That’s what I’ve tried to do.”

Crenshaw returned to work part-time in October 2018, three months after the stroke.

D’Sanchez had visited Crenshaw and seen her struggles, so she wanted to help ease her friend back into the job.

“She really had to learn the job again, so we decided to treat her as a new hire,” D’Sanchez said.


Three months later, Crenshaw was back to working full-time. Earlier this year, she received a promotion.

During the pandemic, she’s been working from home. She had been a regular at the gym, but has shifted most workouts to home, too.

She’s also on a mission to share that younger people can have strokes, and especially wants to bring awareness to people of color.

“Some Black and brown people are hesitant to go to the doctor due to not being taken seriously about their condition or pain level,” she said. “But you have to take charge of your health, especially if you have underlying medical conditions. But even beyond going to the doctor, you need to be a champion of your own health.”